Happy Chickens with a Mobile Coop and Electric Netting 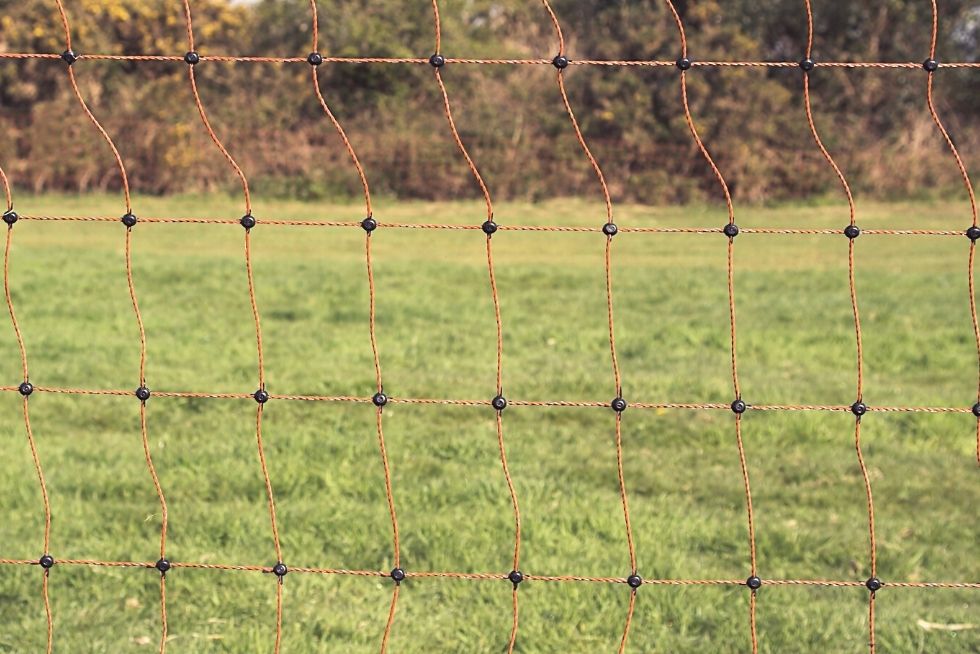 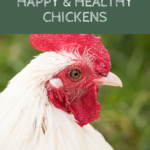 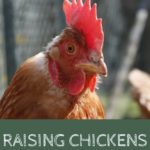 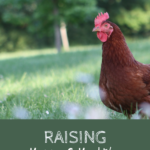 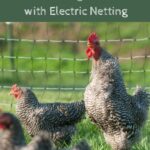 We are passionate practitioners of permaculture — that’s one of the reasons we got chickens in the first place. Chickens de-bug your garden and turn your garbage into compost, all while providing you with delicious eggs.

We also simply love to see happy free-ranging chickens; it’s how they get to display their most natural behavior, instead of being cooped up and pecking at one other.

The eggs of free-range chickens taste so much better as well; have you ever noticed how much more orange the yolks are? That’s what we’re aiming for!

This article was first published on simplelivingspain.com in October 2017. This is the 2021 update!

When we moved to Spain, we had big dreams of having free-range chickens. Less than a year after arriving, we got to borrow our first flock: a rooster (Sanchez), and four chickens (the Sanchitas). They stayed with us while their owners were traveling for a few months. When we were at home during the day, the Sanchitas would free-range, and when we were away and at nighttime, we would lock them in a fenced-in area.

Our “fenced-in area” was simply an outside surface surrounded by ordinary wire fencing held up by heavy wooden posts. Every time the chicken-run grass started to get scarce, we would remove all the posts and “plant” them again somewhere else. Every time, this task took us half a day to complete. On top of that, the portable chicken coop was quite heavy, so every time we needed a few extra pairs of hands to move that as well.

When the Sanchitas’ owners came back from their travels, they kindly allowed us to keep their chickens for good! As our chicken system clearly was not a long-term solution (and we still had to return the coop), we did our research and figured out how to keep chickens so it would benefit both us and the land, but also be as little work as possible. 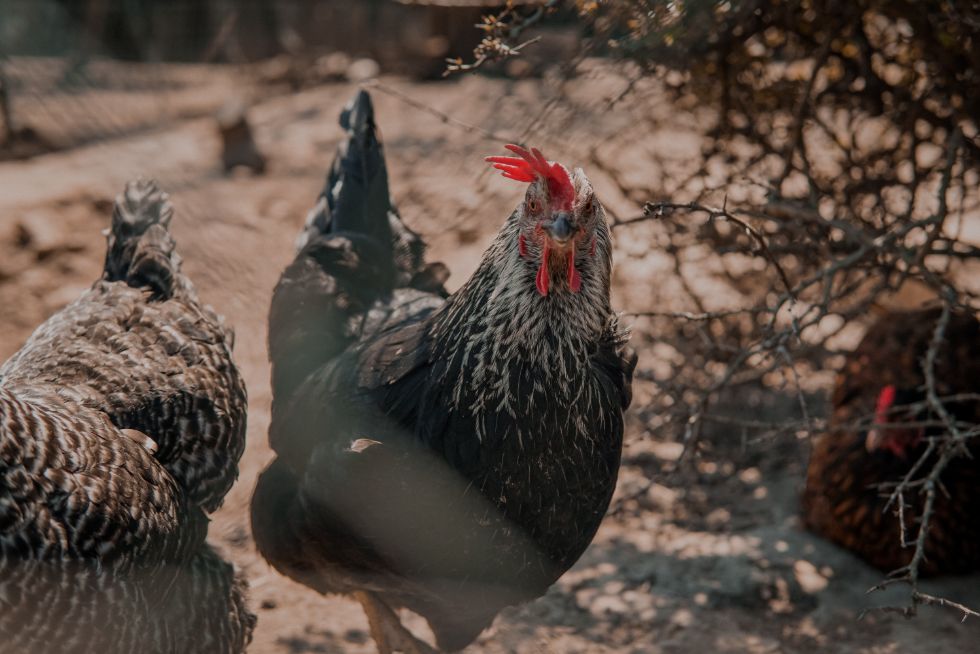 Free-Ranging Chickens vs. Rotating Pastures vs. A Fixed Run

There are so many ways to keep chickens. Most of them have many advantages, but what works for you will depend on your situation.

If you’ve got limited space, a fixed run might be your first thought. Be warned — if you’ve got anything growing in that run when you first put the chickens in, it won’t last long! Chickens have a habit of eating and scratching everything that grows until it’s all gone.

There aren’t many plants that can safely be left inside a chicken run without extra measures to keep them secure. On the plus side, you can protect a fixed run like it’s Fort Knox, making it very predator-proof.

Allowing chickens to roam freely is fantastic: they’ll find loads of insects, trim your grass, hunt and peck here and there. But predators really are an issue. Your chickens could easily wander into the open where predacious birds can spot them — here in Spain, eagles are usually the ones stealing chickens, but vultures have been known to do it as well. Aside from birds, foxes, wolves, a neighbor’s dog, and even a feral cat could be a problem.

To protect your flock, a good livestock guard dog, llamas, or alpacas could help, but perhaps that isn’t the best investment if you only have a few chickens or live in an urban or suburban situation.

Many people compromise by supervising the free-ranging of their chickens, and when this isn’t possible, the chickens go inside the fixed run. If you’ve got loads of space and not too many predators, free-ranging could work for you.

A third option is to house chickens in a chicken tractor, a moveable enclosed pen that keeps your flock safe from both predators and weather fluctuations. When the chickens have exhausted the particular spot of land, you can easily move the chicken tractor to the next spot. This works quite well if your land consists of big, flat fields, especially for meat chickens who don’t really fly anyway.

Take a look here at Joel Salatin’s pastured poultry pen. The downside of a chicken tractor is that it needs to be moved around often (usually daily). If it’s left in the same place for too long, you’ll end up with bare soil (and that’s really not what we permaculturists want!).

The last thing we looked at (and — spoiler alert — the one we ultimately ended up using) was rotational grazing. For a specified amount of time, chickens have access to a certain bit of land to graze, scratch, hunt for parasites and insects, and “clean up.” Then after anything from a few days to a few weeks (depending on the number of chickens, the size of the run, and the type of land), we move the chickens to their next spot.

So we settled on rotational grazing, but we still had to find the chicken coop design that would suit our needs perfectly… and that was how we found the “Chickshaw.”

The “chickshaw” is just what it sounds like: a rickshaw for chickens. It was originally designed by the amazing Justin Rhodes, and you can find the full work description for the original design on Rhodes’ website, Abundant Permaculture.

The features we love about the chickshaw mobile coop are:

How we Tweaked the Original “Chickshaw”

We didn’t have the exact materials required to build a proper Rhodes’ chickshaw, so we slightly modified the design. We also realized our weather and soil conditions in Spain required a few additional adjustments.

The original chickshaw has much more ventilation than ours, and we decided that we wanted a more enclosed pen. We closed off three sides with plastic sheets, and left only the front part (next to the door) covered with chicken wire.  Other tweaks included:

Rather than use undulating plastic sheets, we used flat cellular polycarbonate sheets (like these) to better withstand higher temperatures in summer.

What we love about our chickshaw mobile coop

As can be expected, our Chickshaw mobile coop is not perfect. It had a couple of flaws, the main ones being: 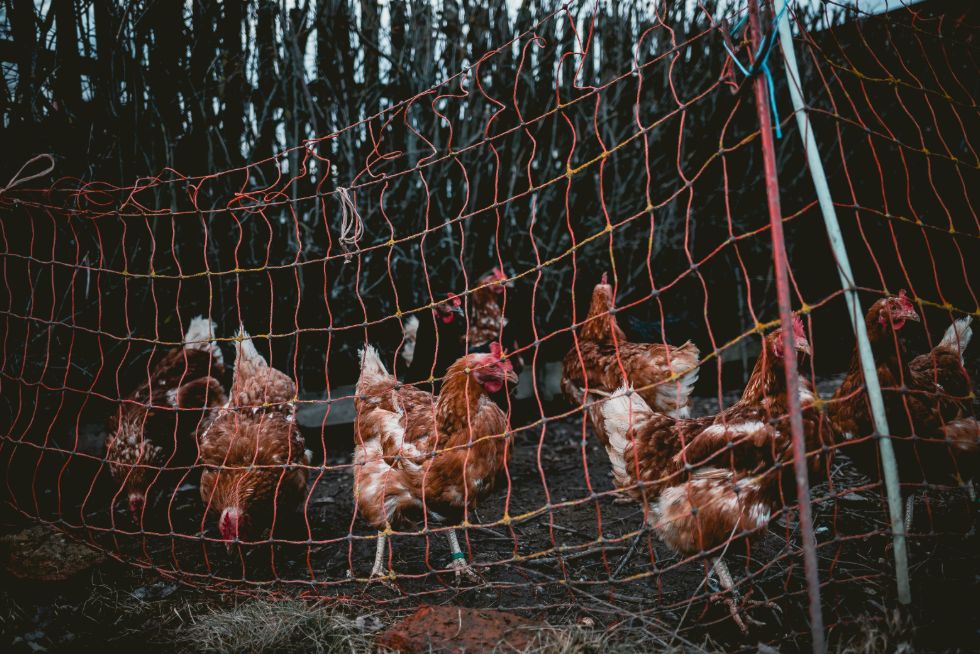 It was in the winter of 2015 when we first started using our chickshaw. Back then, we would just move it from spot to spot, and the chickens (who were almost completely free ranging by then) would just find back their way back to it by nighttime.

In the spring of 2015, after a big fail involving foxes, our chickens moved to a fixed chicken coop for the summer. The following autumn, due to high rains, the chicken run turned into such a mud pool that they had to get out in order to stay healthy (and dry). Thankfully, we still had our chickshaw waiting for us.

This time around, we purchased some electric netting to go with it. As we wanted the chicken run close to our house, we could easily share the house’s main power with an electric controller for the chicken run.

After some time, however, we realized how “well” our new electric fencing was working: our dog (who likes “playing” with chickens a bit too much) ran into the fencing and then never dared to go near it again! In the evening, another time, we heard a fox yelp loudly. So we obviously knew that it worked.

With our successful new electric fencing, we felt more secure leaving the chickens further away from the house. We thus bought a small solar fencing kit. It has its own little solar panel, and, if there’s not much sun, a battery will power the fence for days.

This is the electric controller we have, and we’re really happy with it: (click here to see it on Amazon). It’s a 12-volt battery, and has a 5W solar panel. This one is slightly cheaper: 12V as well, but the solar panel is a bit less powerful, which should still be fine for occasional use.

We’re also very pleased with our poultry netting, which is very light — so light that within about 30 minutes without any help, I can pull out the accompanying posts (obviously, when the electricity is off), transport the netting to another place, and put it up again.

The great thing about poultry netting is that along the ground, it has tiny holes so not even chicks can escape, and then up high, it has larger holes (see picture to the right).

We have a portable chicken fence (see links at the bottom of the post). You’ll find that fences come in all colors and lengths. We have a bright orange one, which I like, but many people prefer dark green (but then, I imagine, it might not stand out as much and people might walk right into it… ouch!).

Oh, by the way, when the electric fencing is on — walking into it, touching it, or peeing on it (boys will be boys) gives you quite the shock. It’s totally harmless in the long term, however, for most people. Before I even turned five years old, I had been shocked by electric fences about one hundred times and I’m physically okay… I’m still dead scared of touching one though (one thing I have in common with our big and bold farm dog).

When we expanded the farm and got a small herd of alpacas, we had a bit of a problem combining the electric netting with our alpacas. The furry monsters would walk straight through the electric fence, and take it down with them. They may not be able to see the thin orange net – and they don’t feel the electricity through their thick fleece.

For a while, we tried just using the regular alpaca fences for the chickens; that goes well most of the time… except when the alpacas are on the other end of the field, and a fox manages to snatch a chicken after all.

We “temporarily” moved the chickens to a sturdy fixed coop and run, right next to the house – where the dog keeps foxes away much better than the alpacas do!

Because of this, we haven’t been using our mobile coop as an actual chicken coop… it’s stood in the alpaca pasture until a hurricane broke it. We’ve decided not to fix it for now – instead, the polycarbonate sheeting is being used for cold frames in the garden.

If you’re still not sure about the perfect way to keep your chickens, Paul Wheaton has done some fantastic in-depth research (as in, hands-on tried it all out) when it comes to different styles of coops and runs. Wheaton has compared feed bills, ease of cleaning, the confinement factor, and bug control for all different systems. Read and see it here! 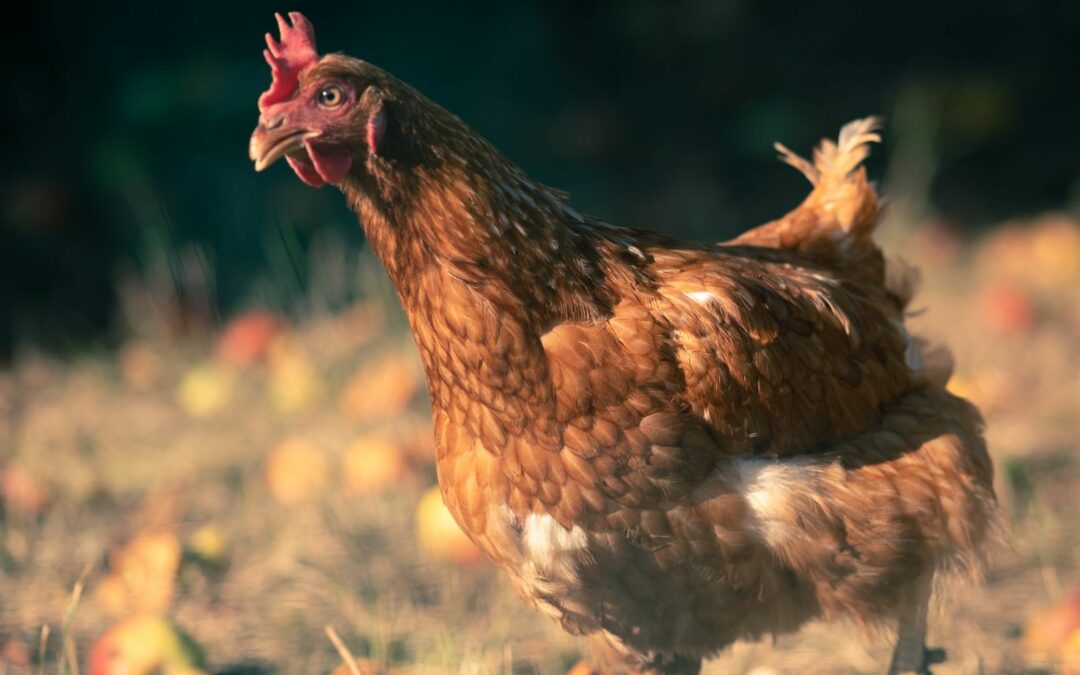 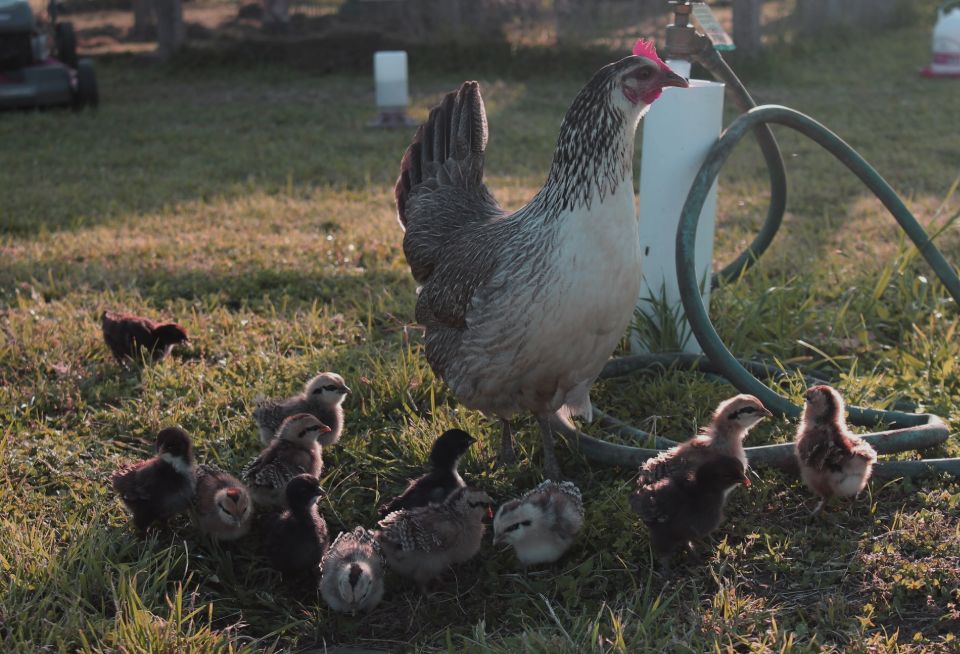 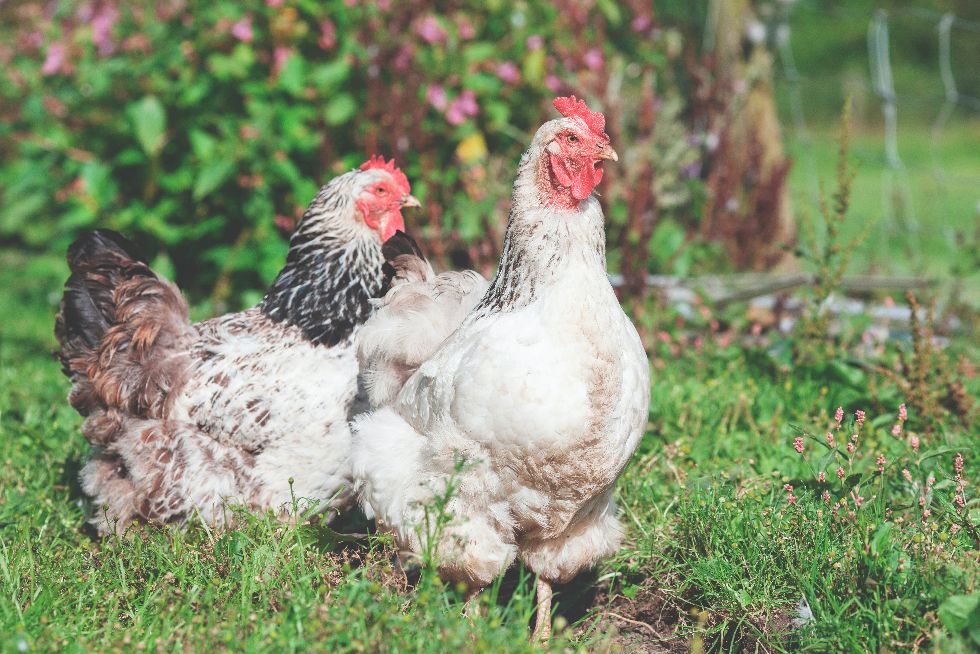