I know, we’re all busy. And we need our phone so people can reach us, and so we can stay in touch with the world.

But does everybody need to be able to reach us that urgently all of the time? When we’re having dinner with our family, do we really need that phone on the table? When we’re pruning tomatoes in the garden, do we want to get that phone out at every notification? Or when we’re meeting with a friend, does it make us happy to hear our phones ringing and bleeping all the time?

Imagine… just 25 years ago, we didn’t have cell phones, let alone smart phones. How did we survive?

How we Survived a Cellphone-Less Time

We’d talk to each other. We would tell each other our plans (I’m going over to this friend’s place!), agree on certain ground rules (be home before dinner at 7!), and we’d just pass by a neighbour to check up on them or borrow something, instead of texting them.

We were more conscious and mindful. We’d make a grocery list before leaving for the shop, instead of relying on texting a family member to check if there is milk in the fridge. We’d make all arrangements before doing something or going somewhere, instead of contacting people on the way.

We were more accepting of the fact we weren’t available 24/7. If we called a friend and he didn’t pick up, we’d just drop by – or call later. Or if we were in the garden and heard the phone in the distance, we’d just think “if it’s important, they’ll call back”.

Not every family member would have their own phone; there was often one phone in the house (in the kitchen or living room, usually), and we often relied on family members relaying messages.

We don’t need to go back to a time without cell phones (please, no! Those make our lives so much easier!) – but humanity has survived the phone-less era, so maybe we could start thinking about a less-phone time.

How about some “Less Phone” Time?

Phones are responsible for a lot of stress in our lives – but only because we let them.

I’ve got news for you: most of the above assumptions are false.

We don’t need to be available to anything and anyone 24/7.
People might be annoyed about us not picking up at first, but when we make clear we’re not purposefully ignoring them (just having some quiet phone-less time) and when it’s clear that this arrangement is there to stay, it becomes much less of a thing. It becomes “Oh but you know your sister doesn’t pick up her phone when she’s working in the garden… she’ll call you back later”.

How You Can Stop Your Phone From Dominating Your Life:

Use The “Do Not Disturb” Feature

(this is called the “quiet hours” feature on the Windows phone)

You can instruct your smartphone to not disturb you for a bit, unless there is an emergency (or a certain call you’ve been waiting for) – and until you turn it back on manually, or until your time is up. It’s not only great for getting quality sleep if you’ve got friends on different time zones texting you in the dead of night – it’s very useful to help you concentrate on just one thing.

The DnD feature has many options – for instance, you can allow calls to come through if people try to call more than once. You can allow calls from certain numbers, or you can schedule the start and end time of your quiet time.

Putting your phone back on “regular” mode will allow you to get calls again, and of course, you’ll see all the messages you missed while you were doing something useful. Really, you didn’t miss anything!

Put Your Phone On Silent Or Vibrate

My phone is on buzzer mode 24/7; when I’m working it’s right next to me so I can answer it right away, but when I’m off duty (working in the garden, cooking, in a meeting or with a friend) I don’t hear it. I will check on it between chores so I’m never out of reach for more than a few hours – but it’s no longer governing my free time.

When I’m in the middle of something, I will hear or feel the phone buzzing. I know somebody is trying to reach me, but it’s not a sound or feeling that compels me to drop everything just so I can pick up.

If somebody calls me and I’m not able to pick up at that exact time, I can usually call back within ten minutes… unless I’m in “do not disturb” mode.

If there’s some kind of urgency… most people know to phone DIY-man. He may never answer his messages, but his phone is loud so one of us is bound to pick it up!

Ah, those notifications! Our phone tells us that somebody sent us something, and we feel compelled to go and find out for ourselves what they sent. Necessary? No. Good for your peace of mind? Definitely not.

Switch off all those notifications – new e-mails, Messenger or WhatsApp messages, people who liked your post on Instagram. Instead, make the effort to check on all of those at set times. I check on messages after every chore or “work block”

If you’ve scheduled in checking e-mails and taking a peek at social media, you’ll still get to read all of it. Maybe an hour or a few hours after it has originally been posted or sent… but the world will keep turning even if you’re not online.

Tone Down On E-Mail And Social Media On Your Phone

If your phone is your only way to be on the internet (I know many people don’t have a home computer nowadays), you can maybe limit social media use to only in certain situations or at certain times.

If you have a regular computer though, in many cases it’s so much more convenient to sit down and answer messages or check out your friends’ updates from your desktop or laptop. You’ll have a better overview, be able to type faster with a regular keyboard, and be “all there” while interacting – instead of dropping a quick response while we’re in a traffic jam or in a waiting room. I even use the WhatsApp browser option to answer messages from my laptop – I do make exceptions, like uploading pictures to Instagram.

Not using the phone apps will often save you battery life – and (if you’re using them on the go) mobile data.

Once you get used to not checking on social media from your phone, you’ll have more peace of mind.

Cell phones have a way of preventing us from enjoying what’s right in front of us.

Have you tried going to a music concert or any kind of show lately? Chances are you won’t be able to see the stage directly – you might be able to catch the show through the cell phones of the people in front of you. You’ll be able to find their movies on YouTube the day after, often of unbearable quality – but at least, those people are now able to prove they were there! Artists are often not a fan of this, speaking of times where people would just wave lighters instead of cell phones… Some, like Eddie Vedder of Pearl Jam, now even have a policy forbidding the use of electronic devices during the show – as much for their own enjoyment as for their fans, who get to really see and hear them perform.

As a passenger (in a car, on a train, or any other kind of transportation), it’s often just a reflex to take out our phones and check on the world. We miss out on so much! Road trips can be all about enjoying the scenery and having some fun (check out these road trip games, they’ll keep any travelling group entertained). And even if you’re just commuting or taking the same route you’re taking every week, be sure to leave your cell phone in your bag for a bit, and observe – the changing of the seasons, a thunderstorm behind the mountains, children playing in the yard, and just ordinary people and buildings.

You might get restless and turn to your mobile phone after all – heaven forbid you missed something important while you were looking at real life! At least you tried though… and hopefully it gave you a few minutes of peace of mind.

What Does Simple Living Really Mean?

Simple Living means so much – and it means different things to different people. Green, sustainable, minimalist, off the grid, homeschooling, all the things,… Read it here. 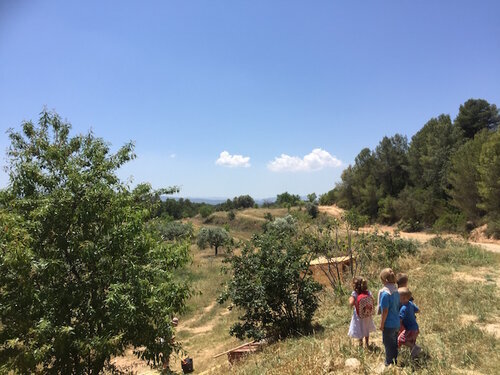 Forget everything you thought you knew about off-grid living… Unless you’re living off the grid yourself, I’d bet at least one of the common misconceptions listed below is something you thought to be true.

How Conscious Grocery Shopping Makes Me A Happier Customer

There’s a choice here: do you want to buy cheap stuff or your favourite brand – or do you want to keep the village store open with conscious grocery shopping?

Making a choice that’s going to change the course of your life – you’ll never know if it was the right one, and what could have happened with the road not taken.