I’m not too sure about the difference between “bread” and “ cake”. I used to think that if it’s savory, it’s bread; but then there are things like raisin bread or these milky soft little rolls we call “bread” as well in Dutch. So there’s a big grey zone! And I decided to call this “banana bread cake”, just to be super clear about what it is (not).

One of the friends who came over to taste this new delight in my arsenal said bread has to be eaten with butter. Since I didn’t offer anybody any butter, we could call it cake. Although it’s definitely very different from my banana (& chocolate) cake! And definitely a lot sweeter…

This recipe was adapted from a recipe found on Smulweb (in Dutch). It’s definitely not the same anymore though – so if you happen to be Dutch (or Belgian) and think you’re making the same thing you ate at my place this week by following the recipe on Smulweb… you’ll be disappointed. If only by the heart attack caused by all the sugar and butter! Although I find my version to be quite sweet as well…

I updated this recipe on June 2nd, as I found a new tweak to the recipe that made it so much easier to make (as in, very easy now) and a little less dense and sticky. And even more yummy. The pictures in this blog post are still the ones from the former (more dense / moist) version… they’ll be changed next time I make banana bread cake.

This recipe will make you a nice banana bread cake. I’m guessing it could feed 8-10 people, depending on how much everybody’s eating.

Ingredients For My Banana Bread Cake:

1 egg
1 handful of sultanas (raisins)
1 handful of peeled walnuts (broken into smaller pieces – you don’t want them too small though). You can replace these by other nuts, or leave them out.

How To Make Banana Bread Cake:

1. Mix dry ingredients together (sugar, baking powder, cinnamon and flour)
2. Add the softened butter and banana puree to the dry mix, and stir until everything is well dissolved
3. In a separate bowl, mix the eggs with the sultanas and nuts.
4. Fold the egg mix into the rest of the dough.

Put the whole thing into a well-oiled oven pan (I use a silicon mold, they’re so easy to use). 45 minutes on 175 degrees Celsius does the trick. Let it cool at least a little bit before you eat it all!

So tell me… was that good, or just delicious? 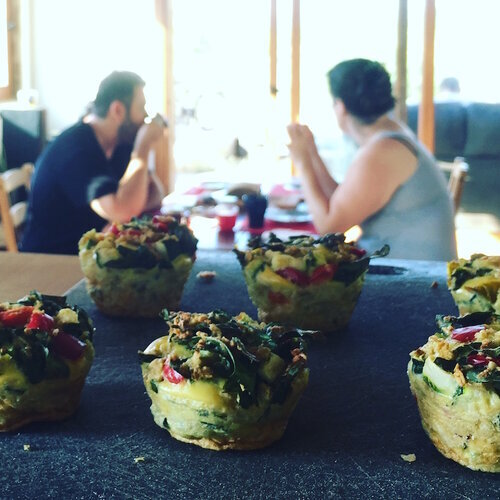 29 Egg-Based Recipes – for when your Chickens just won’t Stop Laying!

If your hens just don’t know when to stop laying… here’s a bunch of recipes to try and eat the extra eggs!

By popular demand: the recipe to my daily no-knead bread – 5 minutes at night + 5 minutes in the morning (+ 35 minutes of baking), and we’ve got fresh breakfast.